Andromeda is a princess.

She is the daughter of King Cepheus and Cassiopeia. Queen Cassiopeia claims that Andromeda is better than the Naiads. 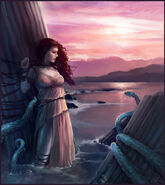 She is the godess of dreams

Her parents were king Cepheus and the vain Cassopiea, and Cassopeia was the fault of making Andromeda be a sacrifice, for Cassopeia had bragged about Andromeda being prettier than the Nereids, who were helpers of Poseidon. In return, Poseidon sent Cetus or the Kraken, to the kingdom. Cepheus received a prophecy that said Cetus would go away if he sacrificed Andromeda.

Unlike her mother, Andromeda is quite dependent on Perseus, yet she is not vain at all.

Friends. none because she is as smart as aidiot

Community content is available under CC-BY-SA unless otherwise noted.